CLIENT
Allan Cerf
Composer + Multi-Instrumentalist +Producer
Washington State, USA
BRIEF
Allan reached out to Counterpoint Sound Worx to assist on a voice talent and muti-track mixing project. This project included a recorded voice over not produced by Allan. The music. however. was all written, composed, and arranged by Allan. The music showcases layered guitar tracks to create the aesthetic of a dreamy-yet-edgy western country vibe. Keyboards provide a lush chorus, while the bass and the drums provide a solid groovy rhythm section. The idea was to have the voice over recording remain dominant and present in the audio, while the music floats in and out to provide an entertaining and engaging phone call waiting experience for customers hoping to reach a dental office. 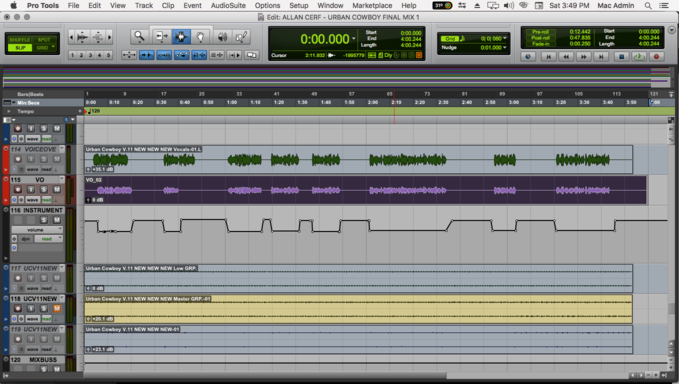 APPROVED RESULT
Click on the audio below to listen to the approved version of the audio project.
CLIENT REVIEW
"I found Christopher Ray on the internet and am glad I did. We worked together on a real-live project, "music on hold" for dentists. I find Christopher's professionalism to be off the charts. First of all, he's honest and a fantastic listener and also - it's fun just to listen to him speak about what he thinks might work - the guy has accumulated massive knowledge over the years. It's important to understand the distinction between engineer and producer - though yes, the line has been blurred. I did not use Chris as a producer but did sound him out, bluntly, for his input on the overall project sound. Many engineers say "hey, that's not my job," which is cool, fine. But it's nice that Chris can comment, "one too many guitars, dude, in my opinion." Chris is thick-skinned. My project, dental music on hold with a professional voice over from a top guy in the industry, was NOT easy, or something Chris had done before. Like anyone, it took time for him to understand that my complicated music, interesting and catchy though it may be, was not the star, the voice over was. Many engineers would simply not have got it and bowed out. Chris needed to duck the music when the voice over came on, but still make it support the VO. And when the talent wasn't speaking, the music needed to shine, particularly because most people hear music on hold in mono - with one ear to the phone. On the all-important vocal sound, Chris hit it out of the park on a very demanding project. We had a lot of iterations of the same material, a lot of back and forth - it's unlikely you will to this degree unless you do music on hold, but Chris met deadlines. In summation, Chris is down-to-earth, yet intellectual, low-key (in a good way) personally, but passionate about music. If you don't like something, TELL him. He's a professional. If you want an opinion - ASK him. I would definitely use his company's services again."